Music and Spiritual Practice - An Overview of Poligraf (part 4) 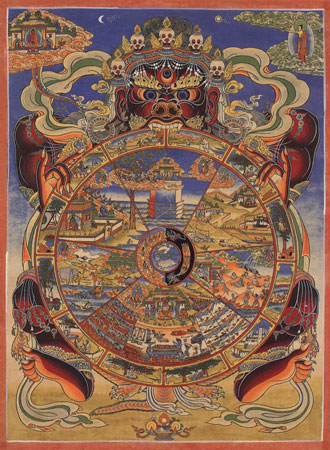 The Wheel of Becoming - Symbolic Representation of Samsara in Tibetan Buddhism

Poligraf's first album is entitled "Samsara." Traditionally, the term refers to the Buddhist concept of the cycle of birth and death in which all beings in the universe take part and which can be escaped only through enlightenment. Personally, I agree with the view that it is rather that very same process of enlightenment, in which ups and downs are in fact the appearance of constant motion towards spiritual growth.

In accordance with that perspective, the album presents a collection of pieces that depicts the journey of an individual who faces a series of challenges through which they will experience various transcendences, on their way to a better version of themselves.

Poligraf is very much eager to spread its wings and record that first album. The boys in the band would be grateful if you would be kind enough to learn more about "Samsara" and listen to the demos. You're also invited to extend your support and pre-order one of the packages we have put together to that intent.

This completes the overview of the band. Stay tuned for "Endeavors Over The Years," a series on the development of Poligraf from the time of its creation in 1998 on through its eleven years of evolution. Coming soon to a blog near you!